Address by Hegumen Andrew (Erastov) at the 6th All-Diaspora Council. 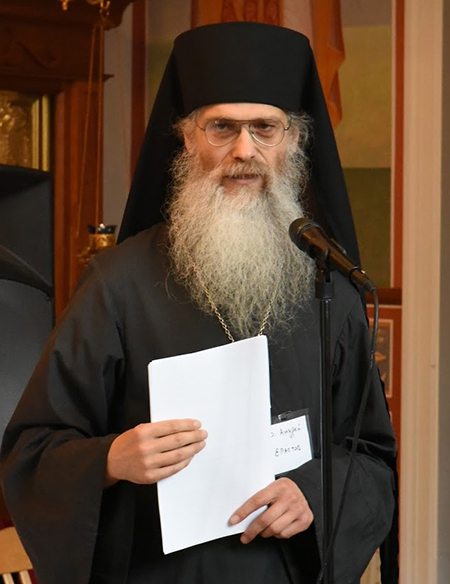 Your Eminences, fathers and brothers,

Let me share with you my thoughts about the situation in the Synod of met. Agafangel.

The Odessa Synod, in its behavior, exhibits some features of sergianism. To be clear, not in the sense that there is no Grace there and the mysteries are not being performed. We are speaking of the church leadership.

Sergianism has many faces. It can adopt many different forms depending on the circumstances. In the case of the Odessa Synod, we can see that Sergianism can masquerade itself in the dress of True Orthodoxy.

Sergianism was first revealed as a lie in the declaration of Met. Sergey in 1927. The entire Russian Church was astounded when it heard audacious and shocking falsehoods issue from the heights of the First Hierarch’s throne.

It is possible that falsehood does not seem so horrible to us, because we are used to it. Falsehood is unavoidable in our fallen world, and we participate in falsehood to one degree or another by virtue of our sinfulness.

In regards to the Odessa Synod, it can be said, however scary this may sound, that falsehood has become typical of its actions and the atmosphere in which it exists. Take a look at the decisions of the last Synod (July, 2016) and Council (October, 2016). They are all permeated with falsehood and Pharisaical hypocrisy. Hypocritical because the announced reasons for their actions and decisions do not coincide with the actual goals. Also note, that all the decisions are signed unanimously. Such unity in falsehood is the sign of a false church. Bishop Stephan put it very well when he told the bishops of the RTOC, since you speak falsehoods, you may not be bishops of the true Church.

Bishops do not speak for themselves. They speak on behalf of the entire Church. Therefore, if the Church accepts this falsehood, it also becomes part of this falsehood. As a result, the spirit of sergianism permeates the entire body of the Church.
We refuse to belong to the Odessa Synod not because of some personal disagreement with Met. Agafangel or because we are unhappy with his method of leading the Church. Many accuse us of that, but it is not true. We cannot in good conscience belong to his jurisdiction, because we consider his church structure to be neo-sergianist.

A neo-sergianist structure has been established in Odessa, where the following elements of sergianism can be found; falsehood, hypocrisy, administrative lawlessness of the episcopate, dictatorship by the First Hierarch, disdain for the voice of the church members and the coercion of their conscience, blind discipline instead of an obedience founded on conviction and love, disdain for the canons and the unashamed manipulation of them in regard to opponents and the ruthless punishment of those who disagree.
A common characteristic of sergianism is also the separation of the episcopate that heads the Church and breaking away from the people who constitute the body of the church, transforming the episcopate into an elite corporation, which considers its own interests, having little in common with the life of the church members. This is a trait of the Odessa Synod as well. The Synod unanimously issues decrees, while the church members unanimously renounce these decrees, as, for example, when our bishops were suddenly listed as retired.

The “Omologia of 2014” contains a good description of Sergianism, which perfectly fits the Odessa synod: “Sergianism typically distorts the understanding of the canons of the church. Under sergianism, the canonicity… takes on the appearance of formal legalism, which can make excuses for any unlawfulness committed by the bishops.
Such canonicity becomes an administrative policy, with which the members of the church can be held in obedience to the sergianist episcopate, regardless of the direction it is taking the faithful.”

The sergianist Moscow Patriarchate habitually manipulates the consciousness of the church members using the fear of a schism.
The very same manipulations of falsehood and fear are being used against us by the Odessa Synod. In their council decrees they call us “schismatics” and announce that we can be in communion with the Church only if we remain subservient to them. Quotes from the Holy Church Fathers are used that condemn the schism. The manipulators create a false choice: either you submit to their authority or you will fall away from the Church, i.e. they pretend that they possess the only entry into the Church. If they want, they will close the door to us and we will find ourselves outside of the Church and apart from the communion with God. It is quite a bold assumption, especially if you consider the moral standard of this organization. It is like when the Pharisees agreed to ban from the synagogue those who confessed Jesus as the Messiah.

In answer to the punishment of the bishops abroad decreed by Met. Sergey, the Council of Bishops in 1934 stated in their epistle, “No one, especially a bishop, should consider themselves morally or canonically obligated to obey such a church authority, which is not concerned with the building up of the House of God, but for its destruction.”

Thank you for your attention.