Address By Hieromonk Ignati (Krutkov) At The 6th All-Diaspora Council 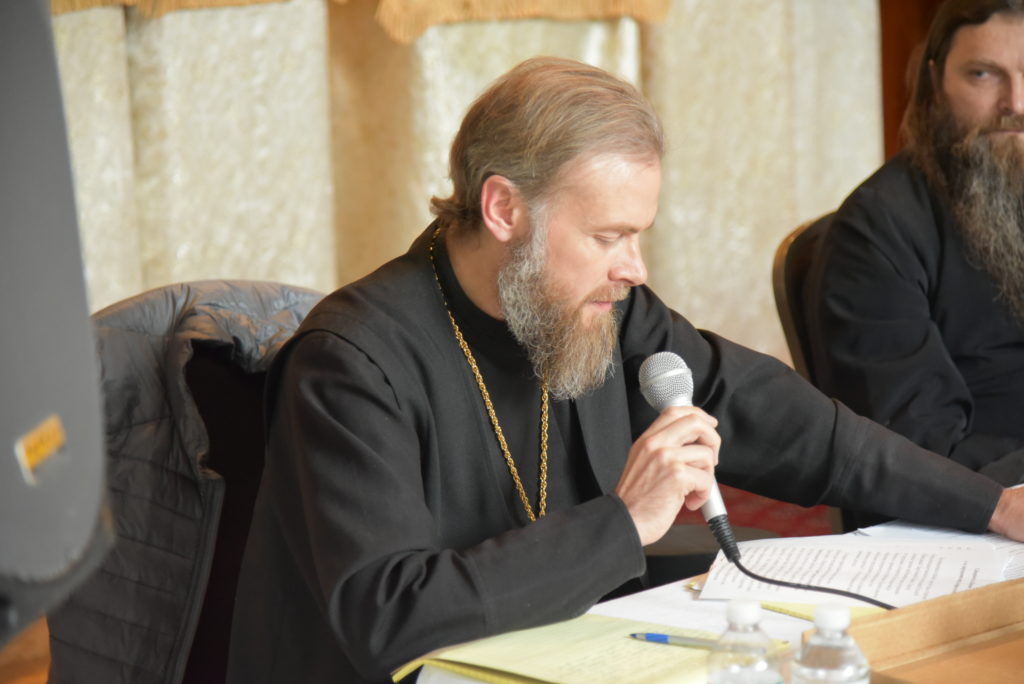 Thoughts for the Discussion of the Report on the Sekach Group

The acceptance of members of the so-called “Sekach” episcopate into our midst, without performing chierotonia on them as required by the ROCA Council of Bishops decision of August 2/15, 1990, brings harm to one of the fundamental aspects of the Church, its Apostolic nature. The Church of Christ is called Apostolic in the Holy Creed, because it maintains a direct succession from the Holy Apostles and continues the tradition of apostolic ministry in this world, as commanded by the Savior, “Therefore go and make disciples of all nations, baptizing them in the name of the Father and of the Son and of the Holy Spirit, and teaching them to obey everything I have commanded you.” (Matthew 28: 19-20) On the one hand, the acceptance of an episcopate without confirming their apostolic succession violates both the integrity of this apostolic continuity and of those who accept them. But then on the other hand, Met. Agafangel’s leadership of the Church, as discussed in the reports to this Council, more resembles the actions of Moscow Patriarchate bishops, and not the best of them, at that.

Many in Russia now feel and express the opinion, that if the church administration of the early 1990s, when the first ROCA parishes were formed in Russia, resembled that of the ROCA(A) of today, then very few would have joined such a church. This sentiment is now being expressed even by our parishioners who recently came over from the MP. In 1991, we followed the voice of the good shepherd, Met. Vitaliy (Ustinov), and gained the safe haven of ecclesiastical and historical truth represented by the Church Abroad. Exhausted by the suffocating atmosphere of today’s world, a person, much like a plant shoot stretching toward the sun, comes to the Church in the expectation of finding Life, with a capital L, in the spirit of the Gospel of Christ. But Met. Agafangel and his Synod, while resting on the laurels of the historical ROCA, employ Soviet methods in leading the church. This attracts no one, and unfortunately, frequently pushes out those already inside and repels those who wish to join. As a result, the apostolic ministry of the church is in practice negated.

In addition, amidst all of what we can refer to as the toxic waste that has accumulated over the last eight years, a very significant part consists of the revolting examples of deceit, cunning, and slander that have emanated from Met. Agafangel and his followers. For example, in trying to curry the favor of our brothers in the Greek Sister-Church, Met. Agafangel in a letter to Abp. Kallinikos about the consigning to retirement of Archbishops Andronik and Sofroniy, stated that this was not a punishment but rather the fulfillment of their request. In fact, it was an attempt to destroy these dioceses.

To the direct question from the Greek Met. Demetrius, during a meeting in America: Does Bp. Roman commemorate Pat. Irenaeus? Met. Agafangel responded “no.” Met. Demetrius repeated the question: Does Bp. Roman commemorate Pat. Irenaeus? And, again without hesitation the answer was “no.” Of course, we all know that the answer is “yes.” This is why Met. Demetrious had to twice ask the question. What prevented Met. Agafangel from speaking the truth and explaining the reason for the commemoration?

Another pathetic example of the spirit of the world of Met. Agafangel is the slanderous fabrication that Met. Agafangel and his current followers have entitled “schismo-ecumenism” and which they confirmed at their Council meeting and published in the media. The statement of the fact that, “in our present time, what we consider to be the conciliar Church takes the form of divided ‘fragments’ that have no communion with each other,” has been labeled the heretical confession of “schismo-ecumenism.” The clarification of the Pre-Council Committee was deliberately ignored: “By noting the fact that two jurisdictions do not concelebrate, it does not follow that they both cannot belong to a single conciliar Church as concelebration is only one of the visible manifestations of the spiritual unity of the Church and not the unity itself.”

In this fashion the accusation of “schismo-ecumenism” could also be made against the authoritative theologian and long-tenured teacher at the Jordanville seminary, Archpriest Mikhail Pomazanskiy, who wrote: “The unity of the Church is not violated by temporary divisions that are of a non-dogmatic nature. Differences among churches often arise due to a lack of information and inaccurate reporting. Also, temporary breaks in communion are sometimes provoked by personal misconceptions of individual hierarchs who lead one or another local church…in such cases, the division only applies to external relations and does not affect or violate spiritual, internal unity.”

It is regrettable that the list of “schismo-ecumenists” would also include the Ecumenical teacher St. Basil the Great, who labored to unite the “fragments” of his time: “Church life in Asia was fragmented into many small streams, and it was not yet clear which of these streams was following the channel in which all of the other streams would merge. Each bishop saw in other groups no greater historical significance than he saw in himself and stood apart from the others for reasons far from those of paramount importance.”

And finally, signs of this now council-proclaimed “schismo-ecumenism” can be found in Met. Agafangel himself in his statement seven years ago, before the start of the problems in the ROCA (A): “For me personally, it has become apparent that the existence of a ‘divided’ ROCA is unnatural. We are separated not by a creed or even by ‘mentality,’ but by some fatal misunderstanding. On the one hand this is sad, but on the other, it gives rise to hope.” Note that the word “divided” is in quotation marks, i.e., divided externally “for non-dogmatic reasons” but united in doctrine.

In this fashion the bishops’ irresponsible appeasement of Met. Agafangel’s fabrications at the October 2016 Council of Bishops in Odessa has led them into the dead-end of “schismo-ecumenism.” Now they summon us into their dead-end and believe that only in their “conciliar” dead-end can all of the pressing issues of the church be solved. “On the one hand this is sad, but on the other, it gives rise to hope,” that the obvious madness of this fabrication may sober up some of them and return to their own position of seven years ago.

The above examples of blatant lies, cunning and “conciliar” slander cannot be reconciled with the inherent virtue of the Church of Christ – its holiness. The father of lies and conceit remains the same.

In conclusion, we can see how the actions of Met. Agafangel and the bishops who blindly follow him have led to a breakdown of the fundamental virtues of the Church of Christ as the Holy, Conciliar and Apostolic Church. We cannot in good conscience agree with this subversion of the Church, which is being carried out before our eyes, and we have so declared by holding the 6th All-Diaspora Council. Together, calmly and freely, we are striving to restore order in the church following the example and by the prayers of the apostles and the holy fathers.