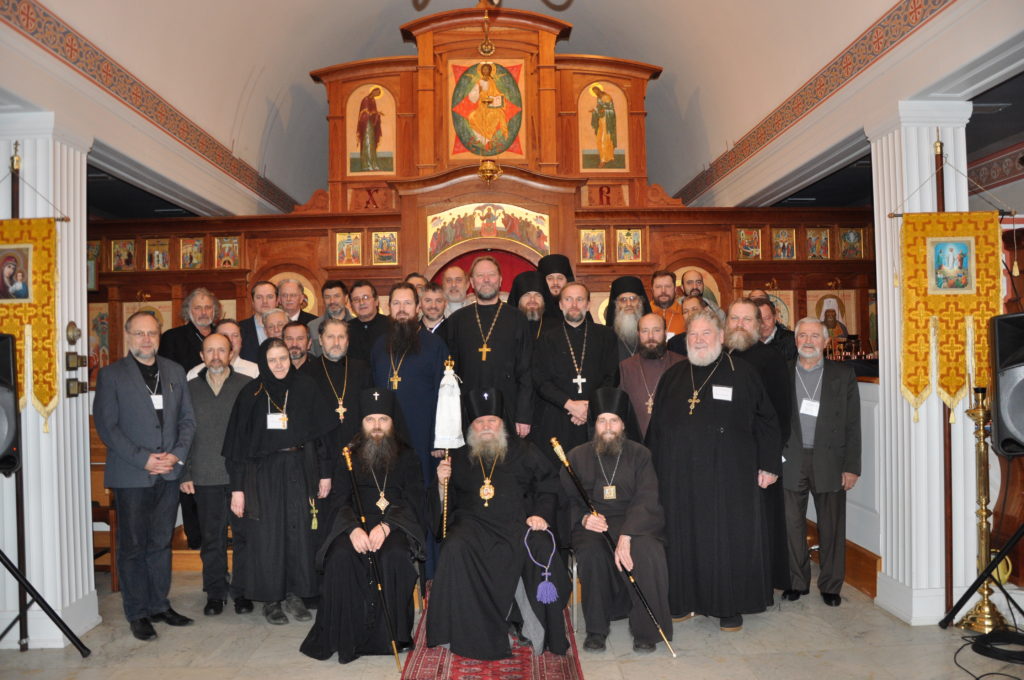 “Thou crownest the year with thy goodness, O Lord,” we, participants in the First Session of the VI All-Diaspora Council, appeal to the incarnate God on the first day of the new year of 2017. Our thoughts turn to the tragic events of one hundred years ago; to the traitorous February and bloody October revolutions, which triggered the destruction of historic Russia and the division of the Russian Church. In response to the fiery trial of 1917, Holy Russia brought forth a host of New Martyrs of Russia and Confessors of the Catacomb Church in the Homeland and the Church Abroad in the Russian diaspora. The Russian Exodus was not an escape solely to save one’s life, but was a providential act akin to the exodus of the Holy Family with the Infant God to Egypt.

The revelation of the Apostle and Evangelist John the Theologian is a reflection of our times. So-called World Orthodoxy, which bears the signs of the tepid, apocalyptical Laodicean church, vainly tries to reconcile serving God with the interests of the prince of this world. And yet, even among all of these churches there remain those who understand that half-truths are only hidden falsehoods. The words of Hieromonk Seraphim Rose, “It is later than you think,” find new affirmation.

The remaining faithful turn their gaze to the Philadelphian Church, which may seem outwardly of little power, but which believes fervently in the Savior’s promise, “I will build My church; and the gates of hell shall not prevail against It.” (Matthew 16:18) An example of such a church, which stands on the rock of the truth of God along with the Old Calendar sister-churches, is our Russian Orthodox Church Abroad.

The prophecy of Russian Orthodoxy has been spread throughout all the lands, and to this day the penitential prayer to God for our suffering land of Russia is raised up on all the continents. The burning words of the Tsar-Martyr Nicholas, “All around is betrayal, cowardice and deceit,” have stood authoritatively and divinely inspired for a hundred years before the conscience of the Russian people. These regal and prophetic words explain much of what has beset Mother-Russia for a century. They also explain the capitulation of a part of the Church Abroad before the unrepentant Moscow Patriarchia in 2007.

Alas, however, even the faithful remnant of the Church Abroad has divided itself into many different parts that do not share Eucharistic communion with each other. On the one hand, the Moscow Patriarchia will be unable to forever conceal its half-truths. God’s law cannot be avoided and the furtive retreat from it becomes ever more evident. On the other hand and almost simultaneously, unrest has arisen in almost every fragment of the once united ROCA. The inflaming of passions, falsehoods and defamation are all elements of a concentrated effort to cast a repellent image on all of the fragments.

Where can a poor soul from the Moscow Patriarchia turn to find God’s Truth? Everything is being done to insure that the Russian Orthodox Church Abroad, once and for all, loses its might as the spiritual seed that will lead to a true rebirth of the long-suffering Homeland and to the unification of the scattered parts of the Russian Church.

We do not endeavor to stop the process of apostasy with our weak hands, but our love of the Lord and of the suffering Homeland does not allow us to remain silent when the Church is faced with a new danger. We are witnessing a new attempt to undermine the ecclesiastical administration of the ROCA. In recent years we more and more hear the voices of respected clergy and faithful members of the ROCA saying that they do not recognize the Church body headed by Met. Agafangel (Pashkovskiy) as being the one they grew up in. As this ROCA First Hierarch was elected in 2008 at the preceding V All-Diaspora Council, so is the current Council fully empowered to provide an evaluation of his actions over the last eight years. The results of the leadership of the Church by Met. Agafangel, and the Synod he created, have been examined from the perspectives of canonicity, dogmatics, pastoral stewardship, and moral standards. With this in mind, however, we declare that the Council was not convened “AGAINST” someone, but rather “FOR” the continuation of the life-saving witness of the Church Abroad in this apocalyptical world.

We hope that the restoration of a canonical, conciliar order that we have undertaken will attract the attention of representatives of the other parts of the once united Russian Local Church. With God’s help, a committee will be formed to do everything necessary so that the centennial of the Russian Exodus will be marked by unity in the Love and Truth of Christ for all those for whom the historic ROCA is so dear.

In these radiant days of the Nativity Season we echo the words of Met. Antoniy, “Our duty is to be one in the Christian spirit, gathered together under the banner of the Cross of Christ, under the protection of the Orthodox faith and the statutes of the Russian Church.” We share in Met. Anastasiy’s hopeful sentiment, when he said, “it is the Orthodox faith that is the true soul of the Russia people and the source of its life force and fortitude. If the people lose this valuable treasure, then all is lost, yet if they keep it, then the earthly kingdom and all else will bow down before them.” We pray with St. Philaret and Met. Vitaliy, “ Ye, O Lord, hear the prayers of Your unworthy servants, and with the intercession of the innumerable ranks of holy martyrs, who suffered at the hands of your enemies, and Holy Patriarch Tikhon, the Holy Hierarch of God who preserved the truth, and the Tsar-Martyr Nicholas II, His Family and all the multitudes of people slain, tormented and who perished by the reign of evil on this earth, thereby gaining the triumph of verity and truth and the light of God.”