Sermon of Vladika Stefan, Bishop of Trenten and North America, pronounced on the day of Celebration at St. Sergius Russian Orthodox Church on May 14th, 2017 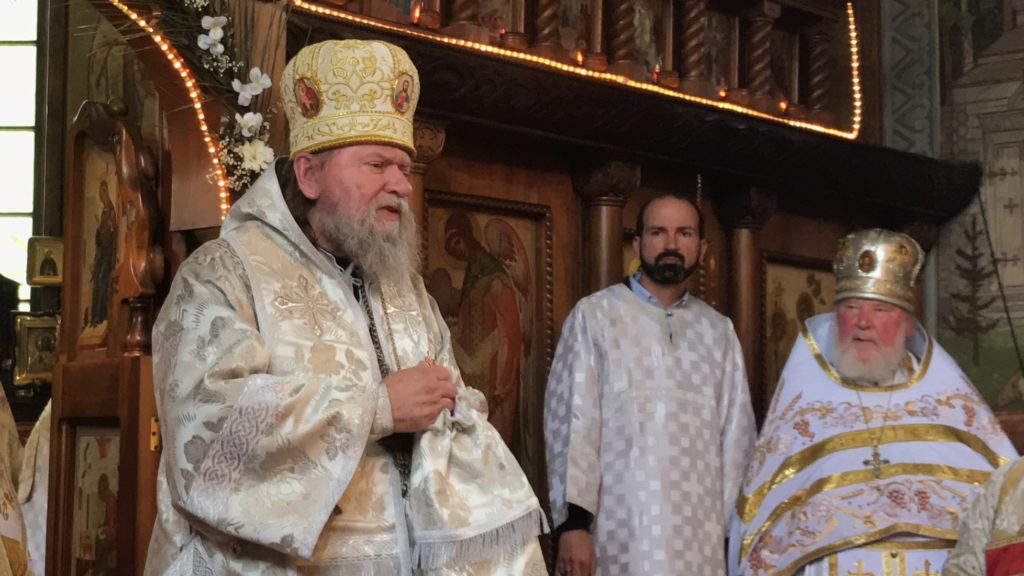 In the Name of the Father and the Son and the Holy Spirit!

The first momentous, so to say, event in the existence of the world was at the same time very grievous – the expulsion from Paradise of Adam and Eve. And the world languished for millennia, until the most joyous and momentous event followed – our redemption by the Savior and the Lord, His suffering and the glorious Resurrection, which we celebrate every seventh day. As Moses was commanded in the Old Testament: six days thou shalt labor, and the seventh thou shalt offer to the Lord thy God. Previously this was Saturday the Sabbath day, but thanks to this wonderful and glorious event – the Resurrection of Christ, every Sunday [the day of Resurrection] the Church remembers His sacrifice, and it is celebrated through the Liturgy.

Christ told his disciples in the Garden of Gethsemane before His Crucifixion that there will come a time when “you shall grieve, but your sorrow will be turned to joy; and no one shall take your joy from you.” (John 16:20, 22). He had in mind His sufferings on the Cross, when the disciples fled from the fear of the Jews, as they say.

About this glorious Resurrection we rejoice to this day, and no earthly grief over the past two millennia could overcome our joy in Christ.

But, nevertheless, the devil attempts even in our time, especially in recent decades, to extinguish this joy in us. To replace it with sorrow, resentment, division, condemnation of each other and the like. You yourself know how the discord that happened in our Church has oppressed the soul in each of us. But now, one can say, the second Pascha has come to us, and this is evident from the joyous faces of those present here. Because God pardoned and gave us the opportunity to re-embrace the Paschal joy in which collectively, together, “with one mouth and with one heart” we can praise Christ.

We should pay heed that our unity and service to God is not of local significance, but of world-wide importance. Christ in the Garden of Gethsemane said: “I am in the Father and the Father in Me” (John 14:10). That is, God the Father and God the Son are one.

But after His Resurrection, Christ said to the disciples: no one knows when the end of the world will come – neither the Angels nor the Son of Man, but only God the Father in Heaven. This does not seem to make sense – does He know or does He not know? But after all, He is the Son of Man, Jesus Christ Himself. How should this be understood?

All this depends on the Divine Liturgy, on the Eucharist, on the remembrance of the Passion on the Cross. Many people do not know that from the moment they sing “I Believe. . .” to the prayer “Our Father” [in the Divine Liturgy] all the prayers that the priest secretly reads before the altar are addressed to God the Father and not to Christ. “Holy, Holy, Holy, the Lord of Sabaoth” [Hosts] is an appeal to God the Father. And in the prayers read by the clergy, it says: For God so loved the world that He gave his only begotten Son, “that all who believe in the Holy Spirit shall not perish, but have life eternal” (John 3.16). Eternal life for us is the Eucharist, a mindfulness of Christ’s suffering in the Cross, to which God the Father sends the Son. And as Christ Himself said, I will build the Church, and the gates of hell will not prevail against it. The Church will exist until the end, until the Second Coming of Christ.

And what does the Church and its existence signify? This is the Eucharist, the remembrance of Christ’s sufferings, His glorious Resurrection. It can be said that everything, from the moment of our Baptism in the Name of the Father and the Son and the Holy Spirit, the immersion, as well as chrismation, occurs by means of the sign of the Cross, by which the priest anoints the baby. The Cross and Crucifixion is above all for us the remembrance of His suffering on the Cross, the Cross is the victory over the devil, this is our Christian weaponry, our Christian emblem. We remember the Cross of Christ every day. With it the Father is glorified in the Son. And if, (and perhaps even very soon), so few faithful Christians will remain on earth that there will be a threat of the Eucharist and the memory of God’s suffering ceasing, then the end will come. But God the Father will not allow this to happen, that the gates of hell will overcome the foundation of Christ’s Church. And then, as Christ said, God the Father will decide to end all the perniciousness of the world, but only He knows when.

Do you know how the devil operates now? He chooses, enthralls and seduces the very best servants of Christ. I remember how the ever-memorable Archbishop Averky said that, before the end of the world, before the Second Coming there will be, perhaps, only one bishop, one or two priests, a handful of believing people who have not betrayed themselves to lies and wickedness, who have preserved the true purity of Christ’s Church. And when this last handful remains, the devil will be ready to devour it, as he also wanted to devour even Christ, yet the gates of hell fell. So at that point the cessation of earthly existence will come, and after that our revival to some degree, not with loud proclamations, but, nevertheless, authentic, based not on lies, cunning and craftiness, but on virtues and on righteousness.

We must not allow ourselves to repeat what led our former Church Abroad to collapse. The wickedness, unkind feelings and lies. This is unacceptable in the Church of Christ, and we shall make a good beginning, for the sake of Christ, for the sake of the purity of the Church of God, everything will be magnificent and prayerful, without any guile and personal judgmentalness. Through prayer and Christ let us maintain this Church and only then shall the gates of hell not prevail against her.

We will now make a procession with the Cross [around the church] and a prayer service for intercession before beginning a good deed. The restoration of our Church Abroad is a good deed. With a dozen different, I do not even know how to term them, groups, jurisdictions, which call themselves ROCOR – the Russian Orthodox Church Outside of Russia. Bishops, hierarchs which never were outside Russia even term themselves thus. But we must remember that these “fragments,” as they are called, somehow act dishonorably, isolate themselves, accuse each other of heresies, schism, and so on. This should not be. We must pray for those who erred. Try to be an example of unity and love. This is most important. God so loved the world that He sent His only-begotten Son, and laid down words that should move us. We must remember the words that Christ spoke to His disciples: “As God the Father loveth Me, so also doth He love you” (Compare John John 17: 23). This is what is necessary to remember. His love is perfect.

There is such a term “oikonomia”. When people in their weakness do not keep to the exact Church rules, as all of us do, being sinful, then the clergy, in order not to alienate people, show compassion. It’s not that we thus accept new rules, for new rules are not adopted by the Church, just as when individually we forgive each other, we [the clergy] absolve sins, even if not exactly according to the letter of the law. This is the sin of the Old Testament Pharisees, remember: “He does not keep the Sabbath!” they shouted at Christ, when it was completely unimportant. Just so here, the hierarchs are given the opportunity to discuss and give peace and decide matters in the Church, not with strictness, but through charity, since there is no sin, as the Holy Fathers say, which can exceed the mercy of God. This also applies to oikonomia. So with us, if someone wishes to, then “broad oikonomia” is applied to him, and if someone does not so wish, then rigor, condemnation and accusations is appli3ed to them. They thus slam the door to the salvation of these souls who may have sinned out of ignorance or weakness.

The word oikonomia applies to us. Everyone, before judging or pardoning someone, must remember that Christ treats each of us with oikonomia. If the Lord were to recompense us according to our works, then we would have perished long ago. But He shows His compassion to us and His mercy. His mercy exceeds every sin of man. His love transcends all. With the same spirit, with the same mentality, we must turn to our erring brethren. It should be a cause for regret that they erred, like a sheep that has lost its way in the mountains. [The shepherd] does not accuse, does not complain about it, but goes to bring it back, and rejoices that though it went astray it has been found. This is what the Church commands us to do. God grant that such a good beginning enters into our hearts, enters with love, not according to the letter of the law of the Pharisees, but according to the law of love. Faith and love must reign in our hearts.

Translated from the original Russian transcript by rocana.org