A Lecture by Hieromonk Ignatius at the Mountainview Family Conference 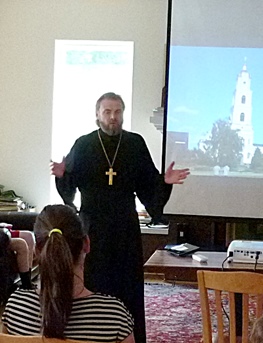 “May my prayer be set forth…”

To what can we compare our Orthodox Christian faith? You may be surprised, but our faith is like a course in higher mathematics. Does that sound strange to say? – Allow me to illustrate.

Imagine a large auditorium, where for two hours a professor goes through a mathematical formula for his students. There are three large black boards in the auditorium. During the lecture, the teacher completely fills one board, then another and then a third. When he runs out of space, he erases what he wrote earlier and fills up a whole board again. And so this goes on for several times, and the students just barely have time to write it all down. And now, as a result of elegant mathematical combinations, by the end of the second hour this formula is reduced to a simple arithmetic expression: x + y = z. But how many symbols, concepts and knowledge are behind this x, y and z! So, my beloved Christians, is it with the expressions of our faith. Our faith is great in the small: vast in content conveyed through a small external expression, great depth within external simplicity.

This is directly related to the main theme of our current Family Conference; the attainment of prayer, a truly spiritual art. Artistry with its various techniques keeps our distracted attention focused on some important subject, reveals a new side of something, which all too often we let our attention overlook.

Well, let us look at one word we use in prayer. No matter how many prayers may exist, none of them can do without it. The word is “AMEN”. Incidentally, some of its synonyms are “STOP and REMEMBER.” The word “Amen” is so deep, vast and special that it came into the Russian [and English] languages untranslated and practically unchanged. In Hebrew it has the same root as the words denoting “firm,” “reliable,” “permanent,” and also “believe,” “trust.” Its well-known meanings are “truly”, “so be it.” What does the significance of this word have for each of us personally, for all mankind, for the holy Church of Christ, both earthly and heavenly, triumphant in eternity?

By concluding our prayers with the word “Amen”, we express our knowledge of God, our faith in the goodness of God, and therefore, the certainty that we will be heard according to the Savior’s commandment: “For this I say to you: whatsoever you desire, when ye pray, believe that ye receive them and ye shall have them. “(Mark 11:24) Moreover, when we say “amen” at the end of a prayer, we accomplish an act of will revealing that what we ask for ourselves and the whole of our life are in Christ’s hands. For example, if we ask in prayer for meekness, humility and patience, when we say “Amen” we agree to, so to speak, the course of treatment, the therapy or surgery that the Heavenly Doctor will appoint for us to heal us from the opposite of those virtues: anger, pride and impatience. Do you ask for humility? Then do not be surprised if someone undeservedly insults us or we lose what our heart is addicted to. If we ask for patience, then expect those trials in life by which this patience is developed. Does an athlete or a musician achieve his victories and mastery only by wishing for it and asking for it? Of course not, so too in our spiritual life. According to the saying: In for a penny, in for a pound. When you say “Amen,” then do not ask why and for what reason difficulties and trials have come.

In addition, the word “Amen” expresses one’s willing accession to any designation from above. Thus the Blessed Virgin answered the gospel of the Archangel Gabriel with: “Behold the servant of the Lord, be it to me according to thy word.” The world was created by God the almighty Creator with the words: “Let it be …”: “Let there be light …”, “Let there be a firmament …”, etc. And the recreation of the world was heralded by the meek “So be it” spoken by the highest of creatures, the Theotokos. As the Holy Hierarch St. Philaret (Drozdov) said, the entire universe held its breath in expectation of this humble, “Let it be according to thy word”. By pronouncing what is in essence “Amen”, immediately the greatest event, the Incarnation, took place, which is reflected throughout the whole human race and the whole universe. So when we say “Amen” we say: “Lord, be it unto me to me according to Thy will, be it unto me according to Thy word, not as I want, but as Thou sayest…”

For the Church, the word “Amen” is an expression of unity. Unity with God, with each other, with the whole Church, earthly and heavenly. In the sacred Scriptures, in the book of the Prophet Isaiah (Is.65: 16) the word “Amen” appears as one of the Names of God, emphasizing the faithfulness of God. As the Name of God it also appears in the Book of Revelation of the Holy Apostle John the Theologian: “And to the Angel of the Church of Laodicea write: These things saith the Amen, the faithful and true witness, the beginning of the creation of God “(Rev 3:14). In the church sacraments with the word “Amen” put the seal of our witness to the faithfulness of our faith and the consciousness of our responsibility for the Gift we have received. Thus, with the sacrament of Chrismation after the priest’s words: “The seal of the gift of the Holy Spirit,” we answer: “Amen.” At the end of the ancient Christian Liturgy, a sacrament of unity with God, a participant answered the words of the priest, “The Body of Christ” and of the deacon, “The Blood of Christ”, with “Amen.” From ancient times during the service the people in the church responded with “Amen” to the prayers and exclamations of the hierarch, thereby expressing their participation in the service, their agreement and unity with the church hierarchy.

From the examples given above, we readily see how significant and deep is this word, so very small in appearance, which we so often pronounce. But how intently should we pay attention to and how reverential our attitude should be towards those words of the Savior, and to those places of the Holy Scripture, where “Amen” is spoken twice. “Blessed is the Name of His glory for ever, and all the earth shall be filled with His glory. So be it. So be it. [Amen. Amen.]”(Ps.71:19) “Amen, Amen, I say unto you, the hour is coming, and now is, when the voice of the Son of God will be heard.” (John 5:25) “Amen, Amen, I say to you, he that heareth My words and believeth on Him sent Me hath everlasting life…” (John 5:24)

And already in trembling awe, the intelligent nature of not only earthly, but also heavenly ones is inclined with the threefold utterance, “Amen, Amen, Amen.” Namely, this occurs during the heavenly Mysteries of Christ in the Divine Liturgy at the consecration of the Holy Gifts. This revelation of the Kingdom of the Father, of the Son, and of the Holy Spirit is already a present reality, to the measure of our ability to receive it within ourselves. The Divine “Amen” beginning on earth extends into eternity, as the Book of Revelation of the holy Apostle and Evangelist John the Theologian states: “After this I beheld, and lo, a great multitude, which no man could number, of all the tribes and tribes, nations and languages, stood before the throne and before the Lamb clothed with white robes and with palms in their hands. And cried with a loud voice, saying, ‘Salvation to our God which sitteth upon the throne, and unto the Lamb!’ And all the Angels stood round about the throne and the elders and the four beasts, and fell before the throne on their faces, and worshiped God, saying: ‘Amen!’ Blessing, and glory, and wisdom, and thanksgiving, and honor, and power unto our God for ever and ever! Amen.” (Rev. 7:9-12)

Dear brothers and sisters! In the example of the holy word “Amen” we see how within this simple and outward brief expression a great depth of meaning and meaning is concealed. When we speak in prayers those words known to all of us such as “Alleluia,” “Thrice holy,” “Lord, have mercy,” and others, we sometimes quite unjustifiably hurry, “swallowing” them and not paying attention to them. With carelessness, we pronounce that before which the Heavenly Powers bow down. We turn prayer into idle talk. Getting rid of such negligent habits will help us to comprehend these words, to realize the honor of which we are considered worthy by God to utter them.