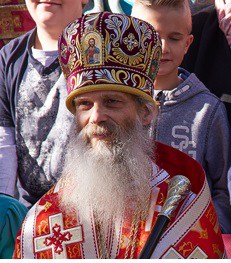 It has been more than 10 years since the May 17, 2007 signing of the union under which essentially the full complement of the Russian Orthodox Church Outside of Russia (ROCOR) was absorbed by the Moscow Patriarchate (MP). During these 10 years, as far as we know, no ROCOR priests have left the MP and almost no protest has been heard from them, even though they have been forced to observe much: ecumenical meetings with the participation of ROCOR bishops; the meeting of Pope Francis with Patriarch Kirill; and, the unveiling by Patriarch Kirill of a monument to Patriarch Sergey. The ROCOR clergy, apparently, feel quite splendid in the MP. Year in and year out, they celebrate the anniversaries of the “restoration of unity” and seemingly cannot delight enough in their happiness. All of this shows that the ROCOR-MP union was not some unexpected catastrophe but rather was a natural and logical outcome.

The ROCOR lost its spiritual vision because it had fallen away from the spiritual life. It is noteworthy that in the 1990s Metropolitan Vitaliy constantly preached about the prayer of the heart and called everyone to its practice. His was a voice crying in the wilderness. ROCOR church life was reduced to celebrations, anniversaries and bliny. Behind the beautiful facade of this church life was emptiness and the absence of struggles and feats of Christian life. The ROCOR was internally decayed, much as a house infested by termites that can collapse at any moment. And this collapse happened in 2007 and we were amazed at how few there were who resisted.

We who did not accept the union should have analyzed the causes of the fall of ROCOR. Unfortunately, however, no such analysis has been undertaken at all. On the contrary, the former ROCOR is idealized, and each small “fragment” group, no matter how microscopic in size, strives to emulate the same old pre-schism ROCOR with its metropolitans, archbishops, synods, etc.

The flaws that we see in our life today as “fragments” are vestiges of the old ROCOR. Of these, we can name the following:

a) A mentality of exclusivity.

For years the ROCOR developed the concept that there was only one true jurisdiction and that we belonged to it. From this stemmed an arrogant attitude towards others, to the “non-true believers,” as well as the suspicions and hostility of old emigres towards new arrivals.
Among True Orthodox, this mentality of exclusivity is manifested in the fact that each is unshakably confident of the divine grace and canonicity of their group, but deny these attributes in their neighbors.

b) The cult of the First Hierarch and, in general, of Bishops.

This phenomenon can be explained by the high moral standard of the ROCOR episcopate of years past. But in 2007 the personal devotion of many to their bishops and confessors deprived them of the ability to make an independent choice in accord with their consciences.

c) The substitution of spiritual life in the Church with nationalistic ideology and culture.

This substitution, which was characteristic of the former ROCOR, is even to a greater extent characteristic of True Orthodox groups, where it has acquired quite grotesque forms.
(It should be noted that for many of those who did not agree with the 2007 union, their choice was often dictated by ideological rather than spiritual motives. Subsequently, in our confrontation with the Odessa Synod, such people proved incapable of understanding the issues involved because, in this case, the correct decision could only be made on the basis of a spiritual “feeling, trained by practice to discern good and evil,” to use the Apostle Paul’s phrase. Those who are accustomed to being guided by formal criteria in their decisions cannot find the right path. As Father Seraphim Rose said, “Anything outward can become a counterfeit.”)

d) The stagnation of thought.

It is impossible to live by the same formulas and myths for decades. The fanaticism and intolerance toward free thought among our True Orthodox has become its own sort Orthodox inquisition. They search out if anyone has written something “seditious,” in order to accuse them of heresy. And more often than not, neither the accused nor the accuser, really know what this heresy consists of. Pride of place in this area belong to Cyprianism and Name Worship. Complex theological questions such as these require serious discussion, not the illiterate and crude declarations that we find in some True Orthodox groups.
As a matter of fact, this hunt for heretics is often just a cover for goals that are far from theology. According to the French proverb, “he who wants to kill his dog, says that it is rabid,” and thus, he who wants to rid himself of an undesirable cleric, declares him a heretic.

e) Finally, and probably most importantly, the custom of thinking about the Church as an administrative structure. Replacing the concept of “Church” with the concept of “jurisdiction.”

For the parishioner in the diaspora, belonging to the ROCOR jurisdiction has become synonymous with belonging to the Church, irrespective of the path pursued by the ROCOR episcopate. This mentality, which is a characteristic of Sergianism, has made it impossible for many to leave the ROCOR even if their consciences did not agree with the union with the MP.
In today’s “fragments,” this same jurisdictional ideology has been elevated almost to dogma. Some groups have developed peculiar theories, according to which the church-administrative principle is the foundation and source of a grace-filled life in the Church.
A belief in a single True jurisdiction, combined with the cult of the First Hierarch, has proved to be an excellent breeding ground for the appearance of impostors who ably exploit these prejudices among diaspora parishioners. No matter how ludicrous is the caricature of a First Hierarch-Dictator parading his microscopic empire, i.e., his one and only True jurisdiction, they are all rooted in the concepts of the former ROCOR.

The state of True Orthodoxy is very far from what it declares about itself. The seat of the Confessors has been taken by the bishops of True Orthodoxy, but they differ from the bishops of the official church essentially only in their rhetoric. How will these bishops and priests, for whom concepts such as justice and truth do not exist and who place their political or material interests front and center, be willing to endure hardships for the truth?

The edifice of True Orthodoxy, which is not grounded on the stone of God’s commandments, but is instead built on the sand of human passions and earthly pursuits, will be destroyed as soon as the Lord unleashes trials or persecutions for the faith. A purifying trial, much as a strong hurricane, will revitalize the spiritual atmosphere. Only faithful souls will remain, a little flock. From them will be formed the last Philadelphian Church that will greet the Savior on the day of His second coming.

We must pray that the Lord will compensate for our infirmities and will give us the spirit of discernment to find the right path in our dark times.