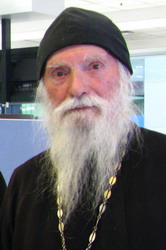 Two encounters with Father John in the expanses of Russia are vividly imprinted in my memory. The first was in the mid-1990s in the Pskov region at the Vyshegorodskiy Monastery. We were happy to learn that a priest from Australia wanted to visit our community. In the picturesque setting of “Pskov’s Switzerland”, as Vyshegorod was called by local residents, we met at the appointed time our beloved guests from distant Sydney. And there they were: Fr. John Stukach, accompanied by his matushka and one of their parishioners, leisurely walked up the hill, which is crowned by the majestic church of The Holy Archangel Michael and is surrounded by monastic cells. I do not know why it happened, but a greeting poured out of my mouth: “Their message has gone out through all the earth…” And in response I heard Fr. John’s buoyant voice: “… And their words to the end of the world!” This is how we met. Within a few more minutes, a feeling of spiritual kinship “in the Fatherland and the diaspora” imperceptibly and permanently took hold between us. The guests stayed with us for two days and of course, between prayers and conversations, the passage of time went unnoticed. Father John spoke much about church life in Australia, about the difficulties of pastoral ministry, and of welcome events in his parish. I remember his expression: “For our generation, thank God, we are at peace, but for our children we worry, and for our grandchildren we often weep.” Father often repeated that it was very important for Russia to organize monastic communities. I remember tears welling up when he showed a photograph of a church donation container that one family had made from a tin can and that was inscribed on the lid: “For the revival of monasteries in Russia.” Father John was without doubt a bearer of Orthodox Russianness and after his visit he left behind the spiritual fragrance of the Orthodox Church Abroad.

Another encounter occurred after the grievous division in the ROCA, if I’m not mistaken in 2003. I was then serving in the Moscow region of Voskresensk. Father John arrived in Russia to support the ROCA parishes during the time that plans for the union with the Moscow Patriarchate were being undertaken. Father urged us to be faithful to the path of the Holy New Martyrs and Confessors of Russia. It was moving and so important at that moment to hear about Archbishop Averkiy (Taushev) and the now glorified Metropolitan Philaret (Voznesenskiy), who respectively ordained Father John to the diaconate and then to the priesthood. Father John was present at the 1964 glorification of St. John of Kronstadt, which took place in the presence of two bishops, Metropolitans Anastasiy and Philaret. Metropolitan Anastasiy was the leading celebrant of the Divine Liturgy, and after the consecration of the Holy Gifts, he unexpectedly proclaimed: “First remember, O Lord, the Very Most Holy Tikhon, Patriarch of Moscow and All Russia.” Indeed, the Metropolitan was the last living member of the Local Council of 1918 during which the last legitimate Patriarch of the Russian Church was elected. Perhaps, with this invocation, Metropolitan Anastasiy revealed to all the spiritual presence of the Patriarch-Confessor Tikhon at the glorification.

Well, time inexorably moves on, and now the current of faith maintained by Father John Stukach, a zealous pastor of the Truth and the Love of Christ, has come to an end. The Truth kept him on the difficult path of the profession of faith, while Love compelled him at his advanced age to travel thousands of miles in order to strengthen younger priests and parishioners of the Church of Christ in the faith of our Fathers! We must remember this stalwart Teacher and not disgrace his work in the Field of Christ! Eternal memory to the newly-departed Protopriest John!