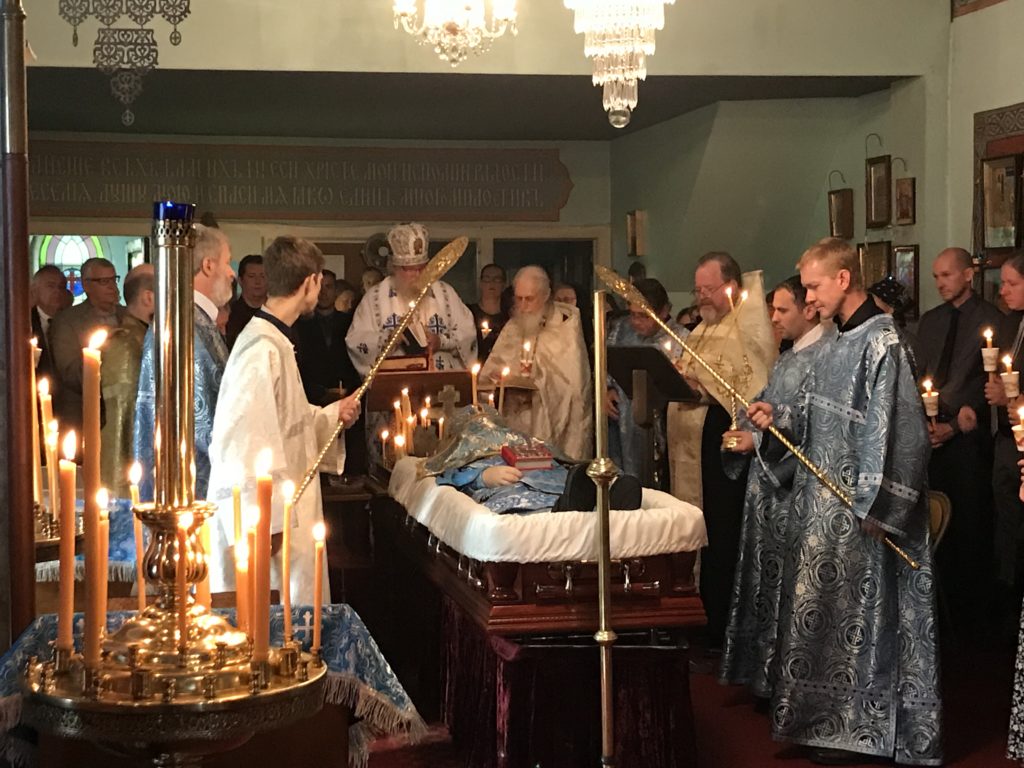 Today we commemorate the 40th day since the repose of Vladyka Stefan and I would like to say a few words about him.

As you know, several months before his death Vl. Stefan had been condemned as a heretic and had been defrocked of his bishop’s rank.

From a young age Vl. Stefan devoted himself to the service of God. He lived a life of piety, labored for the Church and endured both illness and sorrow. He was a modest man and did not seek reward for himself. And yet he was condemned as a heretic and defrocked as a bishop. What an unjust judgment! In Vl. Stefan’s enemies we see individuals who know no bounds, who will stop at nothing to achieve their goals, and who are deterred neither by the fear of God nor by shame before others.

So, the question is why was Vl. Stefan condemned, what did he do to provoke such hatred? In a word, the answer is because he stood for truth in the Church. He did not seek any benefit for himself and his conflict with the Bishops of RTOC was not of a personal nature.

Vl. Stefan complained that the situation in the RTOC Synod tormented him for many years. Finally, he could no longer endure the constant lies, dishonesty and the manipulation. He addressed the RTOC bishops with these words: “Inasmuch as you are lying, you cannot be bishops of the true Church.”

This seemingly simple phrase contains within it an important idea that should become the guiding principle of church life in these dark, pre-Antichrist times.

The church is “the pillar and affirmation of truth” (1 Tim. 3:15), in the words of St. Paul. In contrast, falsehood is the realm of the devil. Lies are alien to the Church.

A sinner who repents can belong to the Church, but a deceiver and hypocrite cannot belong, because he is alien to her, no matter what position he may hold in the church hierarchy.

Bishop Stefan pointed to an important phenomenon that has not been encountered in the past, – the leadership of the True Orthodox Church, operating in an atmosphere of lies. Church leadership of this sort is a parasite on the body of the Church. It is not enough to adhere to the dogmas of Orthodox faith. Where there is no sincerity, no honesty, no love, no spiritual freedom – there cannot be a True Church.

Today we venerate the Cross of Christ. The cross is a symbol of victory over the devil. The Lord Jesus Christ destroyed the power of the devil by his death on the cross. He was condemned as a criminal, endured abuse, beatings, and was finally crucified.

St. John Chrysostom tells us that Christ showed us a new way to be victorious that consists of not striking a blow but instead enduring these blows; not insulting others but bearing the insults; not attacking but instead enduring. This is how the Holy Martyrs, both ancient and new, defeated their tormentors through their suffering and deaths for Christ.

Vl. Stefan was a confessor of truth and morality within the Church. His witness takes on a special weight because he sealed his testimony with his death. That he was condemned, brings him closer to such confessors as St. John Chrysostom, St. Metropolitan Philip, and the Venerable Maximos the Confessor, who not only were physically tortured, but who were also beforehand slandered and unjustly condemned by church councils.

Let us pray for the repose of Vl. Stefan and ask his intercession, so that by his prayers and by the prayers of Fr. John Stukach the Lord may give peace to our Church here in Australia.