The Council of Bishops Meeting in Odessa – October 2018 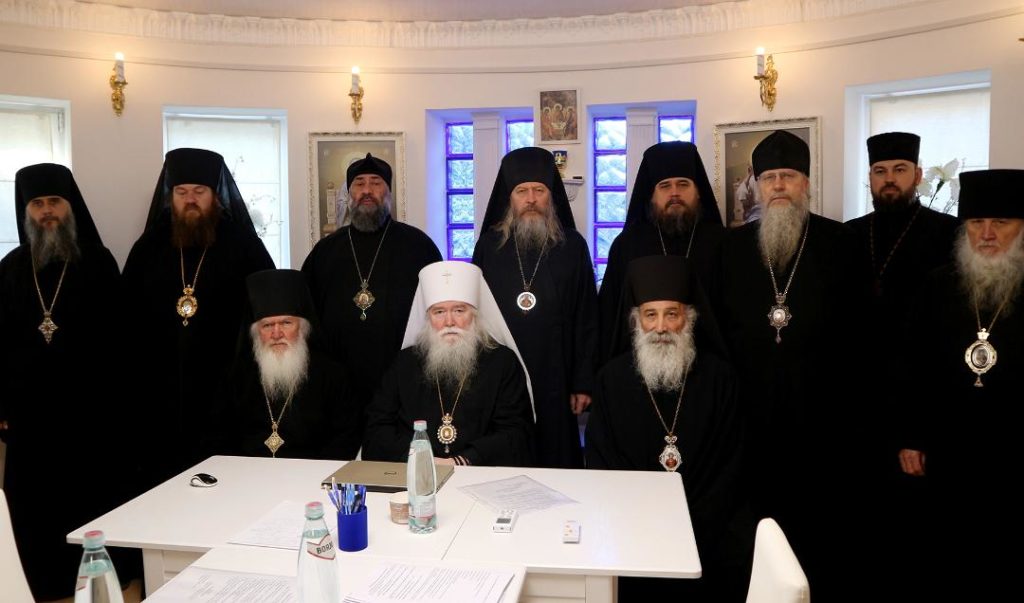 The Council of Bishops Meeting in Odessa

The recent Council of Bishops meeting in Odessa moved to defrock our bishops and addressed us with an epistle. We long ago learned not to be surprised by what flows from Met. Agafangel’s pen. But it is, nonetheless, surprising that a long list of bishops’ signatures is appended under this strange text.

There is no point in commenting on this epistle, but for the sake of those well-meaning people who still remain in that jurisdiction, the following should be said.

You accuse us of separating from Met. Agafangel without canonical grounds because of the assertion that one is allowed to leave his bishop only if the bishop is a heretic.

The concept that it is absolutely required to remain subordinate to a bishop if he does not preach heresy, even if he violates the canons and the commandments, is a fallacy, and an especially dangerous one given the times in which we live. This same concept is promoted by the Moscow Patriarchia and it is very conveniently used to cover up the iniquities of their hierarchy.

By this logic, if a bishop does not preach heresy, then no matter how lawlessly he behaves, he can never be held to account. It is as if the bishop’s Orthodoxy gives him immunity and protects him from responsibility for his actions.

Apparently, such a concept comes from a misinterpretation of the 15th canon of the First-Second Council:

“So that in case any Presbyter or Bishop or Metropolitan dares to secede or apostatize from the communion of his own Patriarch, and fails to mention the latter’s name in accordance with custom duly fixed and ordained, in the divine sacraments, but, before a conciliar verdict has been pronounced and has passed judgment against him, creates a schism, the holy Council has decreed that this person shall be held an alien to every priestly function if only he be convicted of having committed this trans¬gression of the law. Accordingly, these rules have been sealed and ordained as respecting those persons who under the pretext of charges against their own primates stand aloof, and create a schism, and disrupt the union of the Church. But as for those persons, on the other hand, who, on account of some heresy condemned by holy Councils, or Fathers, withdrawing themselves from communion with their primate, who, that is to say, is preaching the heresy publicly, and teaching it openly in church, such persons not only are not subject to any canonical penalty on account of their having walled themselves off from any and all communion with the one called a Bishop before any conciliar or synodal verdict has been rendered, but, on the contrary, they shall be deemed worthy to enjoy the honor…”

The meaning of this canon (as well as the two previous ones, the 13th and the 14th) is that priests do not have the right to preempt the trial of their bishop. They must commemorate their bishop and must wait for a trial by a Council of Bishops, which will either acquit the bishop or depose him. However, in the case of a bishop who preaches a heresy that has already been condemned by a Council, then the 15th canon allows presbyters to break off communion with the bishop prior to a Council’s consideration of the matter.

Thus, the only difference is that if a bishop preaches heresy, then separation from him is immediately permitted without waiting for a Council to try the bishop. If the bishop’s crimes are of a canonical or moral nature, then separation from him is prohibited before the Council trial. In both cases, it is assumed that a bishop must appear before a court of a Council of Bishops to account for his violations.

However, if priests and congregations reconcile themselves to the crimes of their bishop and do not demand a trial for him, then they become complicit in his crimes and share responsibility for them. We are not talking about the human failings of a bishop, or about character flaws and so on, but about systematic violations of canons and moral precepts, which distort the entire course of church life and give it a spirit that is in opposition to the Gospel.

However, what are priests to do if it is not possible to hold the bishop accountable and no church trial can be envisioned? Must they tolerate such a situation indefinitely, absolving their conscience with the thought that they are obeying the canons?

The lives of the saints offer examples demonstrating that they acted differently.

Let us recall St. Theodore the Studite, who broke off communion with his holy archpastors because of their excessive indulgence of violators of the commandments of moral law. St. Theodore did not immediately break communion with his patriarchs, first with St. Tarasios and then with St. Nikephoros. At first, he waited in the hope that they would restore moral cleanliness to the Church, but when St. Theodore became convinced that nothing was being done, he ceased communion with them.

The sainted New Martyr Bishops acted in the same manner when they broke communion with Met. Sergey (Stragorodskiy), even though the Metropolitan did not preach any heresy. Once again, they did not immediately cease communion with the Metropolitan, but only did so when it became obvious, after many attempts, that it was impossible to turn him from the path of apostacy.

Every bishop is consecrated through election by the Church, is responsible to the Church, and is subject to the judgment of a Council of Bishops. In accord with the canons, any bishop, no matter how high his position, can be held accountable for his actions.

In our circumstance, this was not the case. Met. Agafangel, not without manipulation, occupied the metropolitan’s throne. Using his position as first hierarch, he formed a synod in which his supporters constituted the overwhelming majority. In such a situation, there can be no question of an impartial trial by the Council of Bishops of the Metropolitan.

In 2014 a conflict arose between Met. Agafangel and Russian priests over the war in Ukraine. In an attempt to heal this potential schism, the American clergy proposed to convene an Extraordinary Council of Bishops meeting in November 2014. Met. Agafangel agreed to this meeting, but instead of trying to foster dialogue, he used this council to defeat the opposition and to strengthen his individual authority.

After the 2014 Extraordinary Council meeting, there was no longer any hope for the restoration of conciliarity in Met. Agafangel’s Synod. We were at an impasse that could no longer be resolved through canonical mechanisms, such as the Council of Bishops and the church court. The one-man dictatorship of the First Hierarch violates the principle of the conciliarity of church government that is set out in the 34th Apostolic Canon.

Nevertheless, we remained subordinate to Met. Agafangel for another two years, until he attempted to remove our Vladyka, Archbishop Andronik, in order to seize control of his diocese.

What solution were we left with?

In the view of our accusers, we should not have left the jurisdiction of Met. Agafangel, but should have instead continued to pursue canonical means to achieve our desired changes. More than two years have passed since we separated from the Odessa Synod, and despite our small size, our church life is developing in healthy directions. In contrast, what have our accusers managed to accomplish through their “canonical” methods? What changes in the synod of Met. Agafangel have they achieved?

The Bishops of the Odessa Synod are not without guilt for signing their names to epistles that disgrace the Church, and priests and laity are equally guilty for not raising their voices in defense of church truth. Did we refuse communion with the Moscow Patriarchia in order to condone untruth that now hides behind the guise of “True Orthodoxy”?