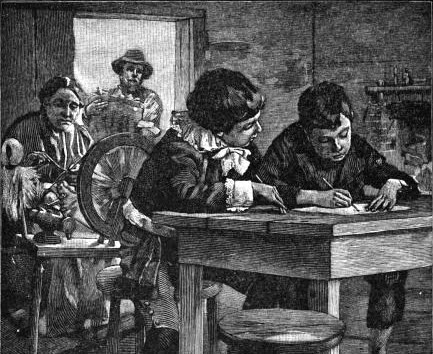 Not long ago I have met an elderly American teacher. I vividly remember his story about his fascinating life and family. His mother grew up in a small town called Dover, Massachusetts and graduated from high school in 1901. By the standards of that time, she received a most ordinary education. She learned perfect French and English, naturally; she could read German poetry; she knew Greek and another “dead” language, which was studied in all schools in those days – Latin. We did not talk about her knowledge of mathematics, although, judging from the textbooks of the time, it should have been on the level of modern universities. Other “dead” but crucial subjects were also covered in school: logic, rhetoric, and classical literature.

What type of schooling was available in pre-revolutionary Russia? Let us turn to the memoir of a remarkable Russian writer Ivan Shmelev, the author of such masterpieces as “The Summer of the Lord” and “The Pilgrimage”. In his autobiographical story “How I became a writer,” Shmelev recalls how his first writing inspiration came to him:

“… And suddenly, in the midst of intense studies, among the exercises with Homer, Sophocles, Caesar, Virgil, Ovidius, Nazon … – something appeared again! Didn’t Ovid push me? Isn’t his metamorphosis a miracle? ”

From this list of Greek and Roman classics, we can safely conclude that at the end of the 19th century Ivan Shmelev received a classical European education.

We can say with confidence that graduates of modern public schools, private schools, and colleges can’t imagine such academic achievement and breadth of knowledge. Schools are incapable of coping with the simple task: to develop reading comprehension in children on the level good enough to analyze complex texts (for example, poetry) and correctly write in their native language – English. Since 1950s the quality of public education in the United States had begun to plummet — and this decline continues to accelerate every year. It is impossible not to notice the increase of moral decay and anti-Christian propaganda in schools, which only alienates our children from God and us, damages our relationship with a child, and prevents us from exploring his individuality and talents. We have to put our children in schools, which sow the seeds of “education” that not only directly opposed to our Orthodox faith, but common sense and a basic sense of decency. Is there a way out of this, seemingly, hopeless situation?

Fortunately, and, undoubtedly, by God’s will, parents have a choice in this country – to educate children at home. The number of parents who finally took the education of their children in their own hands is growing at about 15-20% every year. Over the past few years I’ve heard many reasons why parents embarked on homeschooling. Some took children out of school after receiving a letter from school stating, that according to the most recent “scientific” research homework was found to be ineffective and now abolished. Others broke up with the school after a math teacher had confidently stated that two lines couldn’t be parallel because they were of different lengths. Others dropped out of school when they saw the unheard-of depravity and impetuous amoral behavior of other students in the class – still children! Another family thought long and hard what to do with the child when the school proudly announced plans to get rid of absolutely all books and switch all education to tablet computers – so that children would always have fun at school.

For any sensible Orthodox parent looking soberly at the modern, pre-apocalyptic world, there could be only one true way – to switch to homeschooling – at least, as an addition to public schooling – and to understand that it’s not teachers, but parents who should play the main role in a child’s upbringing and education. How can we make homeschooling a reality? Let’s talk about this in Part two.