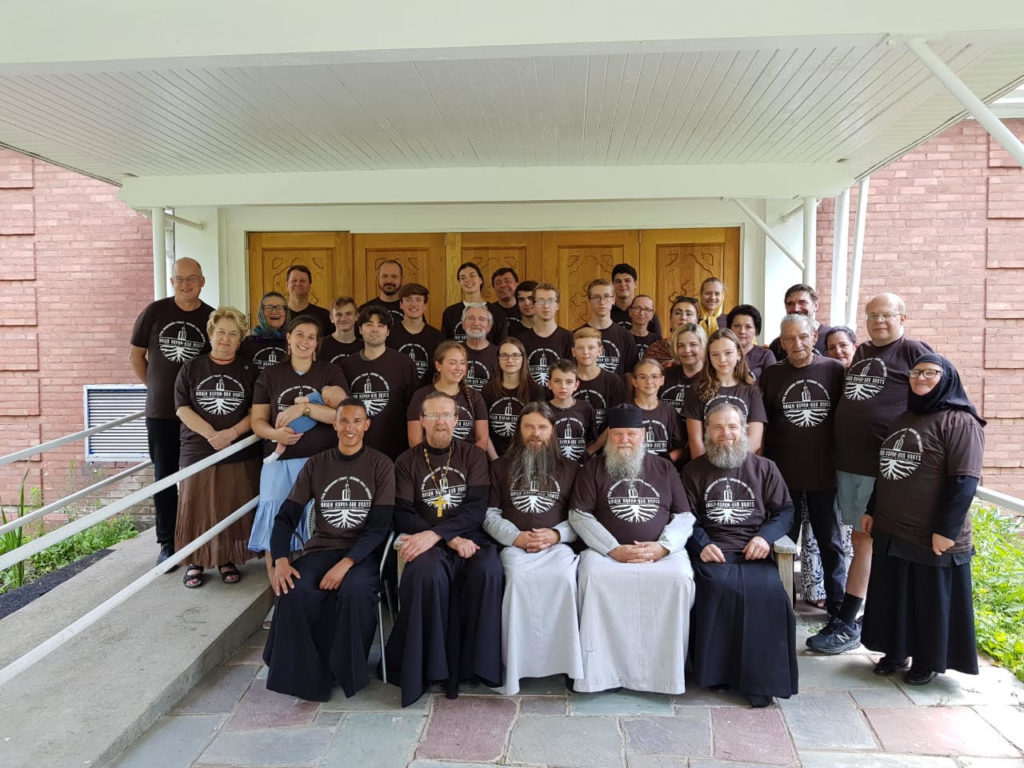 The Religious and Cultural Center in Mountain View, NY, hosted the annual Russian Orthodox Family Conference, July 12-14, 2019, with this year’s theme of OUR ROOTS.

On the evening of July 12th, the feast day of the First Apostles Peter and Paul, the participants in the Family Conference shared the joy of meeting in this picturesque and cozy location.  Everyone recalled the atmosphere of previous years’ conferences, watched videos about last year’s Family Conference on the theme of the “Tsarist Golgotha,” and about the 2015 Family Conference in which the ever-memorable Archpriest Wsewolod Dutikow participated.

The next day, July 13th, began, as always, with morning prayers in the church.  The prayer service was followed by the traditional welcoming speech to all the participants from the ruling bishop, Archbishop Andronik of New York and North America. After breakfast, our Conference guest from Russia,  Archbishop Sofroniy of St. Petersburg and Northern Russia, gave a presentation on the development and future of the parishes of the Russian Orthodox Church Abroad on the territory of the suffering homeland.  Vladyka shared his personal experience about how the Russian people, deprived of their spiritual roots by the godless authorities, were provided the opportunity to restore their succession from the thousand-year old Russian Orthodox Church through the ROCA hierarchy.

After a short break, the next discussion was conducted by Hegumen Ignatiy (Krutkov).  His report was dedicated to the memory of Professor Ivan Mikhailovich Andreyevskiy, who also used the literary pseudonyms of Prof. Ivan Andreyev and Prof. Ivan Solovetskiy.  The unique character of Prof. Andreyevskiy was striking in his steadfastness in faith and faithfulness to Christ God, despite all the trials that befall this confessor of the persecuted Catacomb Church in the homeland, during his imprisonment in the Solovki prison camps and in the forced labor camps that constructed the White Sea-Baltic Sea Canal.  After passing through the crucible of Bolshevik persecution, Ivan Mikhailovich was an outstanding representative of the Russia diaspora and dedicated his life to give witness to the fate of the persecuted Russian Church and to many years of teaching at the Holy Trinity Seminary in Jordanville, NY.  Vladyka Andronik also shared his memories of the professor; how gratifying it was to learn that the Vladyka was one of Prof. Ivan Mikhailovich’s students!  At the suggestion of Archpriest Gregory Kotlaroff, immediately after this discussion, everyone together sang ETERNAL MEMORY in honor of Prof. Andreyevskiy.

In the free time that was available before lunch, a group of participants in the Conference, consisting of Abp. Andronik, Abp. Sofroniy, Fr. Gregory, Hegumen Ignatiy and several brothers and sisters, visited the ailing priest Victor Zavodov at Albany Hospital.  They served a prayer service and conveyed words of support to Fr. Victor from Russia and the Abroad.

After lunch, the discussions continued with Archpriest George Tsap, who with great love and gratitude, spoke about the ever-memorable Metropolitan Vitaliy (Ustinov).  Vladyka Vitaliy was a world class prelate who serves as an example of spiritual activism, sacrificial service to the Church of Christ, and, the confession of the Truth of God in the world of apostasy that surrounds us. After a break, a Round Table was conducted with all attendees able to ask and discuss any issue of importance to them.  Everyone had the opportunity to anonymously write questions on a piece of paper in advance and place them in a bowl prepared for this purpose.

The All-Night Vigil service that evening was celebrated by Fr. George Tsap.  Vladyka Andronik and the brethren sang in the choir, while Vladyka Sofroniy heard confessions. We had dinner by the campfire and this year, under the evening sky, watched the video “Eternal Memory,” which included the last interview with Fr. Wsewolod Dutikow, and a film about last year’s Youth Congress.  The evening continued with the singing of folk and patriotic songs around the campfire.

On Sunday, the Divine Liturgy in memory of the patron saints of families, Sts. Cosmas and Damian, was led by Abp. Andronik, concelebrated by Abp. Sofroniy, Fr. George and Hegumen Ignatiy. The choir under the direction of Marina Lukin sang remarkably.  It was gratifying to see so many conference participants and to feel the prayerful atmosphere in the church.  After the liturgy, the Procession of the Cross was made to the Cross in honor of the Holy Royal Martyrs that was established during last year’s Conference “The Centenary of the Tsarist Golgotha.”

After lunch, we made a pilgrimage to the Seminary in Jordanville, where a prayer service was conducted at the tomb of St. Philaret (Voznesenskiy) and a Litany was served at the tombs of the hierarchs of the Russian Orthodox Church Abroad.  We then visited the monastery’s cemetery, where we venerated the memory of Prof. Ivan Mikhailovich Andreyevskiy and Brother Joseph Muñoz.

Remembering the glorious hierarchs and faithful servants of the Russian Orthodox Church Abroad is a prayerful appeal to OUR ROOTS, and it is more important than ever in our uncertain times to follow as spiritual beacons these examples of the best representatives of the Catacomb Church in the suffering homeland and of the Russian Church in the diaspora.  It is gratifying to observe that from year to year, our Orthodox Conferences become Family  Conferences not only in their composition of representatives of families from different ROCA Dioceses, but also in the sense of the atmosphere of one big spiritual FAMILY that is formed at the Conference.  God be our glory!!!