Father Vladimir Krivolutskiy – a Confessor of the Russian Church 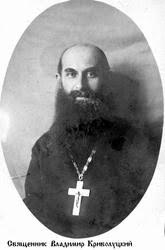 Dear Brothers and Sisters, greetings on this Sunday of the 4th Week of Great Lent!  As you know, this Sunday we commemorate the memory of St. John Climacus, who described the steps of spiritual ascent in his book of Godly wisdom, the “Ladder of Divine Ascent.”

On this day we should also commemorate a confessor of the Russian Church, the catacomb pastor Father Vladimir Krivolutskiy (1888-1956).

Fr. Vladimir was ordained to the priesthood in 1923 by St. Patriarch Tikhon the Confessor.  In 1927, he refused to join the  schism of the Russian Church perpetrated by Metropolitan Sergey (Stragorodskiy).  This faithful shepherd of the true historical 1000-year-old Russian Church instead continued his ministry secretly in the catacomb parishes.  The Sergianist schismatic church structure, born of lies and betrayal, vividly revealed its essence in the example of the confessional bravery of Fr. Vladimir.

“One day three archpriests representing the Soviet patriarch Aleksey I (Simanskiy) came to visit my father. They had a long conversation in my father’s office.  At the time I was home and I watched as these people left our home having finished their conversation.  It was clear on their faces that they had not achieved what they wanted … My father came out of his office with a thoughtful look and said to me:  Alyosha, we could have been rich people but I chose exile.”

Fr. Vladimir was given a choice: either serve in a large Moscow parish or be sent to a forced labor camp.  Soon after the priests’ visit, Fr. Vladimir was arrested by the Chekists during the Easter service, which he was celebrating in an apartment in the Moscow area.  He was sentenced, as was said then, to a “tenner,” that is, to 10 years in the labor camps, ostensibly under Article 58, paragraph 10, for anti-Soviet propaganda.  After nine years of grueling work in the Karaganda camp to which he had been assigned, Fr. Vladimir’s health was ruined and, practically near death, he was released and sent back to Moscow.  While Fr. Vladimir was in the Karaganda camp, he had managed to write his historical witness, “On Sergianism,” and this manuscript had been dispatched to the West.  And then, with the passage of time, a miracle of Divine Providence occurred.

Aleksey Vladimirovich, the narrator of these events, continued to attend catacomb parishes of the Russian Church.  He subsequently became an engineer and worked in Moscow.  Over time, as the number of catacomb pastors known to Aleksey Vladimirovich diminished – some were arrested, some passed to the Lord – he was left without spiritual sustenance.  With the start of the “perestroika” period, churches in Moscow began to be restored.  Aleksey Vladimirovich, as an engineer specializing in heating systems, was invited by one of these churches to help them in such a restoration.  He agreed and gradually became involved in the parish life of this church.  At first Aleksey Vladimirovich felt great enthusiasm, but in time these feelings were replaced by disappointments, as the atmosphere in the church began to more resemble a business enterprise than a church.  At this moment of spiritual distress, Aleksey Vladimirovich received a parcel from the Lesna convent in France of our Russian Orthodox Church Abroad.  And can you guess what was in the package?  It was the monograph “On Sergianism” written by Fr. Vladimir Krivolutskiy.

As I noted above, this work by Fr. Vladimir came out of the prison cells of the Karaganda camps, then made its way abroad to the library of the Lesna convent where is was published as a monograph.  The sisters of the convent had learned that the sons of Fr. Vladimir – Aleksey and Ilya – were living in Moscow and sent them a parcel with the monograph.  Aleksey Vladimirovich did not even know that his father had written this work but holding this monograph in his hands he said to himself:  “My father calls for me to return.”  With this Aleksey Vladimirovich left the Sergianist schismatic and heretical church structure of the Moscow Patriarchia and returned to the Russian Orthodox Church, thanks to God’s providence and to the prayers of his father – the confessor Priest Vladimir Krivolutskiy.