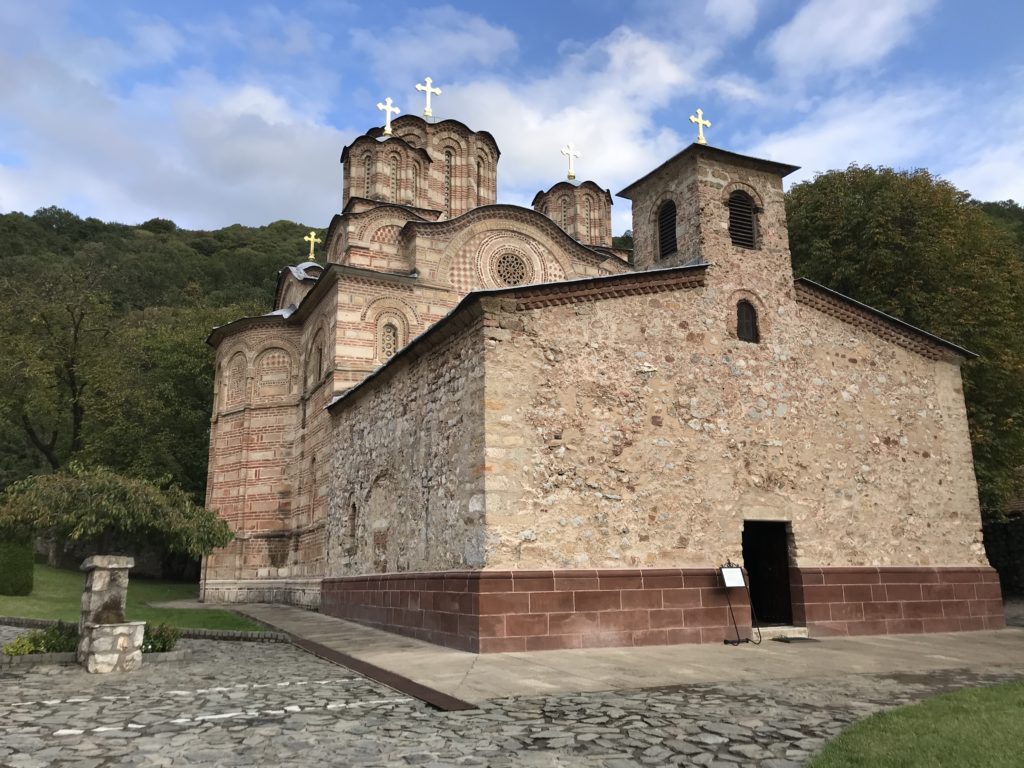 On Tuesday October 12, the ROCA delegation visited the Milkov Monastery where lived the Hegumen of the men’s monastery, Archimandrite Ambrose (Amvrosii) Kurganov.  Despite reposing in the Lord at the young age of 40, Father Ambrose left a significant mark on the history of ROCA monasticism. Many future bishops of the Church Abroad learned the science of monastic life under his tutelage such as Archbishop Anthony of Los Angeles, Archbishop Anthony of San Francisco, St John Maximovich and others.  It is well known that when one of the brethren of the monastery accused another, Fr. Ambrose yelled, “Leave!  If you accuse one of your (monastic) brothers, you must leave the monastery!”  The following day the accusing brother fell to his knees, asking for forgiveness to the monk upon which he trespassed.  This example shows us how strict the holy father felt toward accusation.

The group of faithful served a molieben in the Church of the Entry into the Temple of the Theotokos to St. John of Shanghai and San Francisco, the very place the Saint was tonsured a monk.

Afterwards the faithful walked to the grave of Hegumen Ambrose.  Archbishop Andronik officiated a panikhida with Father Dmitriy Dobranravov.

After visiting the Milkov Monastery, the delegation visited the ancient Ravanica monastery, where the relics of King-Martyr Lazar lay. After the Turks invaded the lands of Eastern Europe, King Lazar defended his country.  The night before the most important battle at Kosovo, the king had a divine vision where he was given two options. To either win the battle, and thus defeat the Turks, or, to have himself and his entire army inherit the everlasting kingdom of heaven.  King Lazar chose the latter and was killed on the battlefield, although the battle ended as a draw, yet now his relics are incorrupt and all of Serbia venerates the King-Martyr.

After visiting the Ravanica Monastery, the delegation visited the 15th Century Serbian monastery Manasija, surrounded by massive walls and towers of the medieval fort, where the ancient Church of the Holy Trinity is located.  Although today the church is under the authority of the ecumenical Serbian Church, the church structure itself encompasses an example of the early icon paintings from which other local churches learned of the skill.  Here the relics of St Stephan Lazarevic, King Lazar’s son, are located. The top of the tomb was opened for the delegation to see and venerate by a nun on the premises who gave much respect to our bishops, clergy and faithful. Father Stefan, of the STOC, later that day made a comment, that he visited and venerated the saint’s relics many times before, but this day was the first time that the tomb was uncovered for him to witness.