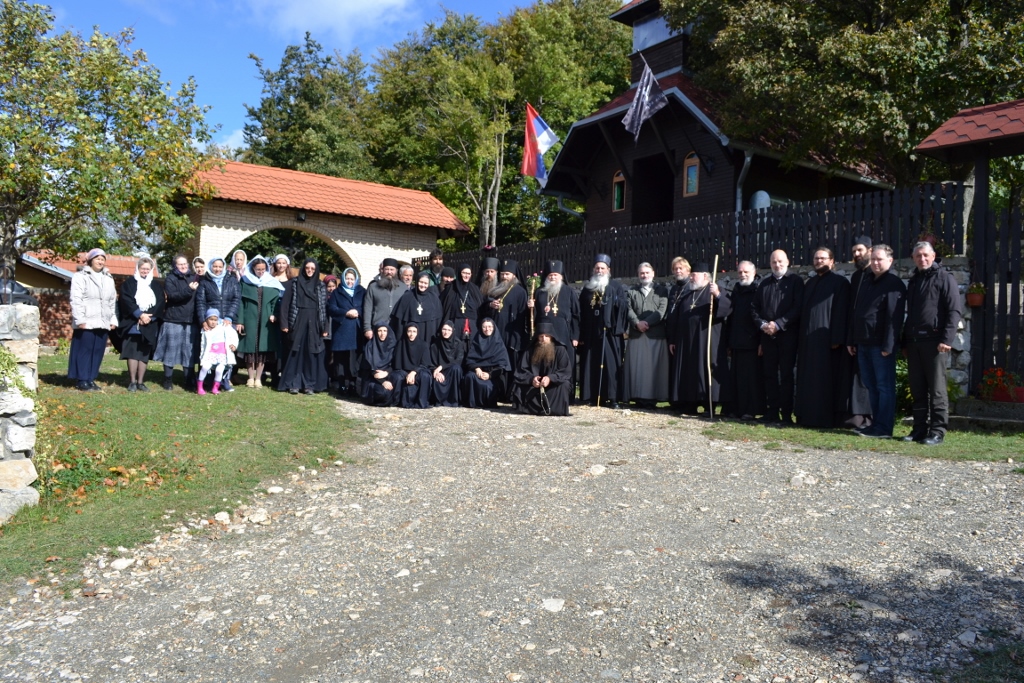 Tuesday evening ended with the ROCA delegation making its way to the foot of the mountain where the Novi Stjenik women’s monastery is located.  Novi Stjenik meaning “new (rock) wall”.  A “short” hour and a half journey from the foot of the mountain, through a rocky, windy road, through mud and rain puddles, mostly driving in first gear and you reach this magnificent display of monastic toil and fortitude.  Half of the group made this journey on Tuesday evening through a caravan of four-wheel drive vehicles making it before midnight while the second half would arrive the following morning on Wednesday October 14th for the liturgy on the Feast of the Protection of the Mother of God.  Archbishops Andronik and Sofroniy were greeted with “trezvon” bell ringing and the Icon marking the 100-year ROCA jubilee was brought into the church for all to venerate.

During the reading of the Hours, reader Vitaliy Shumilo was made sub-deacon.

After the Gospel, Bishop Akakije said a homily on today’s readings.  Many years (“Mnogaya Leta”) was sang for all bishops and at the conclusion of the service, Archbishop Andronik addressed the faithful indicating how important it is to stay in truth, away from ecumenism and sergianism.

Following the liturgy was a group photograph and festive luncheon prepared by the nuns in the mountains.  One of the first toasts from the Russian delegation was for all the work that went into having the pilgrims visit the monastery – not an easy task to accomplish.

Protopriest Nikita Grigoriev reminded all of God’s Love for mankind that He sent His only begotten Son to trample death by death.  And although in the end of time the Church will be persecuted, because as Christ said, “If they persecuted Me, they will also persecute you” (John 15,20), there will always be a safe haven which God will divinely reveal.  And although it will appear that the Antichrist has won, the ultimate triumph is of Christ’s True Orthodox Church.

Regarding our Churches Concelebration it was noted that during the 6th All-Diaspora Council of the ROCA, that Abbess Euphrosinia (Nikolic) was invited to see and witness what was to take place at the Sobor.  By her words, mother Euphrosinia awoke with the inspiration that she must attend the Council.  At the conclusion of the Sobor there was a Liturgy where nun Catherine of the STOC was invited to sing and the abbess blessed.  This shows us that even at that time in January of 2017, perhaps at some level, that our Churches were together.

Mother Abbess Euphrosinia (Molchanova) from the Lesna Monastery also added to the spiritual exchange, that during this trip, a member of the delegation brought with her an Akathist book to the (Montreal) Myrh-Streaming Iveron Icon.  In the book there were a list of names to pray for.  Also, in the book was a handwritten letter, addressed to Archimandrite Amvrosiy Pogodin and was addressed from Versailles (France).  The letter was given to Mother Euphrosinia to read on the Sunday evening of our Churches Concelebration.  Mother Euphrosinia straight away recognized the handwriting and knew the archimandrite in the letter.  This was a letter from Archbishop John (Maximovich) to his priest in France and it only became known that Sunday evening on the day of the Uncovering of the Relics of St. John.  Abbess Euphrosinia said that she believes this is a letter from St. John to all of us here celebrating this Feast.

There, at the women’s monastery the delegation also met hieromonk Maxime of the STOC.  When residing in Uteshitelevo, he was attacked by three bandits, believed to be sent by the official church, where he was beaten with metal clubs, scarring him and breaking his leg. After a long recovery, he now serves on a regular basis at the women’s convent in Novi Stjenik.

Glory be to God for All!