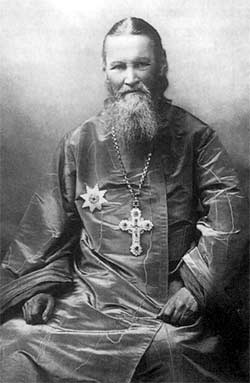 On January 2nd new style the Russian Orthodox Church commemorates the day of the repose of one of the greatest saints and miracle workers revealed in Russia not long before the revolution and the fall of the Russian Empire, St. John (Sergiev) of Kronstadt. As a young man St. John dreamed of being a missionary in Northern America, but after a church in Kronstadt (a suburb of St. Petersburg) where he would later be the rector, was revealed to him in a dream, he came to understand that his own people needed a missionary no less than the pagan peoples of North America. His fervent prayers and the unceasing spiritual labors that his spiritual diary reveal called down God’s grace upon him, and granted him the ability to work miracles. The son of a poor church reader from northernmost Russia became known even to the Imperial family. He was present at the repose of Alexander III, and participated in the celebration of the marriage of Emperor Nicholas II and Empress Alexandra Feodorovna and took part in the coronation ceremonies. Because of his many, prolific miracles, St. John is often compared to St. Nicholas, the miracle worker of Myra in Lycia. And like St. Nicholas, he is well known and beloved far beyond his native Russia. St. John’s diary and other works were translated into English and other languages still during his lifetime.

His sermons and other writings don’t express any sort of new teaching, and his approach and views were quite traditional and conservative. Nevertheless, his fiery faith and the multitude of miracles made them seem entirely new, and attracted thousands. Constantly calling people to repentance and to more frequent and a more spiritually aware participation in the holy mystery of the Eucharist, he was forced to institute common confession for everyone at once, so as to accommodate the multitudes that would attend his celebrations of the Liturgy. St. John often spoke of the sorry spiritual state of the Russian people, constantly calling for repentance and fidelity to Orthodoxy, as well as to the Tsar as the Anointed of God and the first defender of the faith, warning that if this call was not heeded, the Empire would fall and untold troubles and persecution would befall Russia. All of this came to pass very soon after his repose, and caused St. John to be especially despised by the new Bolshevik government. The site of his burial was destroyed and the very mention of his name was forbidden. However, his memory and veneration for him lived on in the Russian emigration, and there were constant calls for his glorification, for the possibility to venerate him as a saint and beg for his intercession.

The decision to celebrate such a glorification in the name of all the Russian people, persecuted in the Soviet Union and exiled abroad was one of the first important acts of carried out by the Church Abroad when St. Philaret (Voznesensky) was chosen as the third first hierarch of the Church Abroad in 1964. The glorification of St. John of Kronstadt became the first of the glorifications celebrated by ROCOR. St. Philaret himself had a great personal veneration for St. John, and like him, often spoke of the necessity of more frequent Communion of the holy mysteries.

At the talks for young people that st. Philaret organized he once recounted the story of a miracle of St. John that was told to him by an eye witness, a physician, that like st. Philaret, ended up in exile in Harbin, China. At the turn of the XX century this man was living and practicing medicine in St. Petersburg. One day he was called in by a family for an emergency. He found them all very upset and in great distress. It turned out that their little son, while playing and fooling around, had somehow managed to swallow a whole package of pins. Before the doctor could decide what to do with and for the child, Fr. John (Sergiev) of Kronstadt arrived, in answer to their call for his help.  Once he understood what had occurred, Fr. John took the child into his arms, went into the next room, and fell before the icons. Everyone else fell into a sort of stupor, a stony silence. After a while Fr. John walked back into the hall where everyone was waiting, leading the child by the hand. The doctor telling this story remembered that Fr. John seemed exhausted and was very pale, white as a sheet. He put the package of pins on the table and left without another word. Such was the strength of the Kronstadt Batiushka’s faith and the power of his prayer.