Celebration in Honor of Vladika John by the St. Sergius of Radonezh Parish 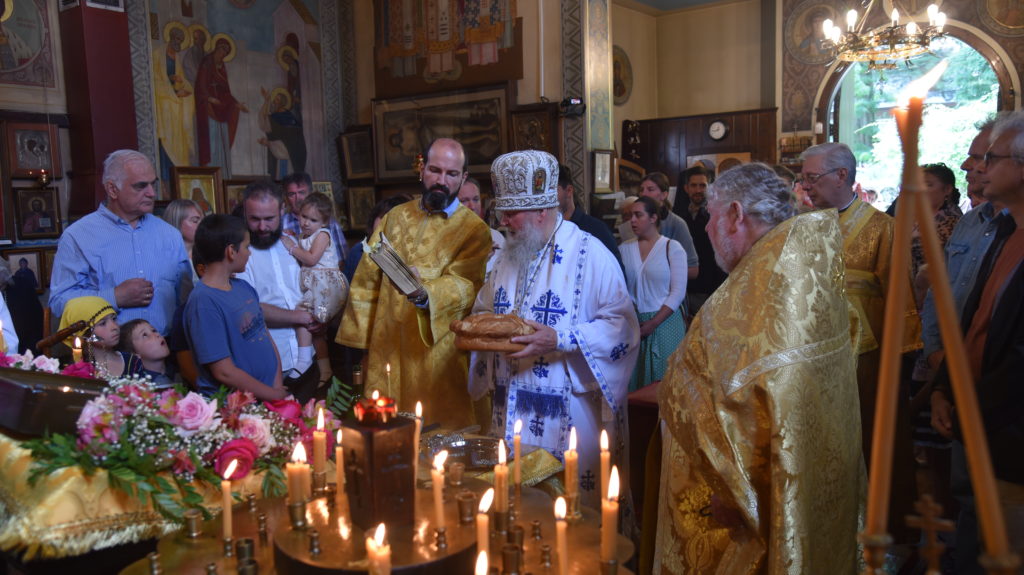 On the 4th July 2021, the Parish of Saint Sergius of Radonezh in Valley-Cottage held their annual celebration in memory of the great Saint of our time – Miracle-Worker Archbishop John of Shanghai and San-Francisco.

Divine Liturgy was performed by Archbishop Andronik, attended by Fr. Gregory Kotlaroff and  Deacon Gregory Axelrod. The parish of St. Sergius is very multi-national, and consists of Russians, Americans, Arabs, Ukranians, Georgians, Moldavians, Greeks, Byelorussians and Serbs. Preserving a common Faith, every Nationality brings to the parish its own traditions, its own history, and shares their cultures. That day, the very many parishioners were witness to a very interesting rite – Serbian “Slava” (Glory).

Every Serbian family has its own Patron Saint and Intercessor. Christian Saints are real people, who lived God-pleasing lives and were glorified after their earthly end having entered Paradise. They pray for us – common people before God, and God from his love for them that glorified His name, fulfills their holy prayers. Every Orthodox Serbian family has their own Slava i.e. family celebration, dedicated to their own Patron Saint and Intercessor. This tradition was never interrupted – neither during the Turkish yoke, nor during various wars and tribulations.

Before all else, Glory is a spiritual event, the most important element being the priest’s prayer, while entertainment and charity being its other components. A spiral celebratory cake is baked on the eve of Glory, which is decorated with a Cross and letters: JCCH  NIKA, which means – Jesus Christ Conqueror. This cake symbolizes our daily bread given to us by the Lord. As well, red wine and a dish of boiled grains and raisins are prepared for that day, the latter dish being served in memory of deceased relatives.

In the morning on Glory day, the whole family goes to church for Divine Liturgy. At the end of the Service, the priest cuts the cake and sprinkles it with the red wine, followed by everyone singing Church chants. When this is done, the priest breaks the cake with the words: “Christ is among us!” And everybody responds with: “(He) Is and will be!”

The day of veneration is always a special date in memory of some past joyful event, or about a deliverance from some misfortune. The Glory is dedicated to the Saint on the day noted in the calendar, and is done in gratitude to him. The invitations for this day are issued only once, as there is no need for this to be repeated for subsequent celebrations.

Thus, in the parish of St. Sergius Radonezh, the tradition of celebrating Glory was dedicated to the great overseas Saint John of Shanghai.

Parishioners from other parishes also came to honor the memory of Vladika John, whose many miracles have not diminished even in our current times.

The celebration continued with a benevolent repast and presentations by adults and children.

Archbishop Andronik said a word about spiritual life, while the parish priest called upon the congregation not to forget the riches of our Church Abroad, gifted by our Lord and which were preserved for us by our Saints.

The children’s choir of Sergius Radonezh sang praises to the Saint, while the choir from Astoria, presented a male and female ensemble that sang magnificent verses to the Russian Saints.

In the celebratory concert, secular songs were also heard, dedicated to the Lord, His Blessed Mother and Saints. This was followed by stories from children about Vladika’s life on earth and his miracles. The celebrations continued till evening, having become an indeed a solace for all in these unstable times.

Vladika John, pray for us!