On the 100th Anniversary of the ROCA: A Little About the Former Parishioners of the Church of the Holy Trinity, Astoria, NY 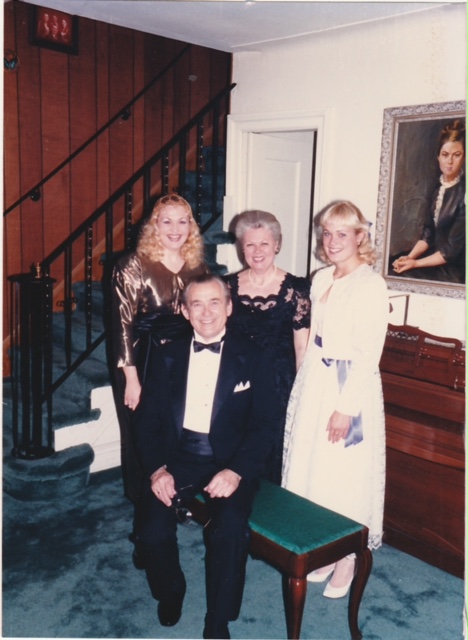 A little about the former parishioners:

This year we celebrate the 100th anniversary of the Russian Orthodox Church Abroad. The church, which was founded by Russian immigrants who fled from Russia, from the Bolsheviks, from the communist yoke. Among this immigration, during the so-called “second wave” that fled during the 40s and 50s, my ancestors, my grandparents, and my parents, Artur (Arthur) Yakovlevich Suvalov and Margarita Petrovna Lapina, also immigrated. Arthur was 14 years old when his family fled from Belarus, to Poland, and then on to Germany.

Arthur’s father, Yakov, served as a communications officer in the White Army under General Denikin during the Russian Revolution. Yakov did not make the last wave of evacuation, was captured by the Reds, but a fellow countryman eventually helped him get out. The Suvalov family hid and lived near Gomel, Belarus. Yakov got a job at the post office and loved to tell how Arthur snapped 14 pairs of skis that were given out to postmen in winter so that they could deliver mail in the snow.  Arthur and his friends loved to compete on the nearby rolling “Swedish hills” – that is, mass graves from the time of the wars with the Swedes. The trick was that you had to go quickly down the hill, and at the last possible moment, jump up and get to the other side of the hill, without breaking your skis. Arthur didn’t always succeed!

When a friend warned Yakov that another Stalinist purge was coming, and that this time the friend would no longer be able to protect the Suvalov family, the family quickly gathered their belongings and fled from Belarus to Poland, later making their way to Germany. In Germany, Hitler’s forces “offered” Arthur to enroll in a type of “Jugend Schule”, or the family would be given up for execution. Clearly, Arthur agreed to go to this school. Jacob and Irina went to work on a farm in Bavaria. After his release by the Americans, Arthur entered the University of Mainz where he graduated from the Faculty of Architecture.

Rita, my mother, was only 7 years old when the family “chose” to retreat with Hitler’s troops from the Ukraine, where thousands of people were dying of hunger as a result of Stalin’s collectivization. The Germans took the Lapin family as “Ostarbeiters”, that is, “Eastern workers” who were then sent to labor camps. My mother remembered well how she nursed Nina, her sister, during the day, while parents Pyotr and Dora worked in a German camp, where they were forced to carry bricks on their backs all day. My mother did not really have a childhood, but she fondly remembered how she went to the Dnieper River to fish before the family was taken by the Germans. Fishing on the river remained the fondest memory of her childhood.

After the war, the Lapin family settled in Stuttgart and Rita entered “Maedchen Schule” – a German high school for girls.  My grandfather Pyotr got a job at a local juice factory. Both families came to the United States in 1949, considered to be the “second wave” of Russian immigration.

Fateful coincidence: both families were transported by the same ship from Germany to the USA, in the same year 1949, but during different months: the Suvalov family in July, and the Lapin family in September. My parents met at an ice rink in Central Park in New York, when a group of Russian youth would gather to ice skate once a week, when it was customary for young men to invite a young lady to skate with them to the music, arm in arm.

Over time, both families settled in Astoria. Grandfather Jacob and my father Arthur got jobs at the Steinway piano factory until Arthur was called upon by the US Army to fight in the war against North Korea. Arthur was advised that by joining the army, he would thus quickly receive American citizenship. Arthur served in the army and was badly wounded by a shell, receiving shrapnel in his face, arm, and leg. Before the operation, the surgeon warned Arthur that if he tried to remove the shrapnel from his leg, Arthur could remain crippled for life. So my father lived his whole life with this shrapnel in his leg – and in spite of it, he went skiing, skating, dancing, etc.

When the Holy Trinity Russian Orthodox Church was founded in Astoria under Prot. Peter Mocharsky, the Suvalov and Lapin families played an important role in supporting the church. Arthur served for many years on the audit committee of the church, and then as the elder (starosta); Rita and Nina took part in the sisterhood, and my grandmother, Dora Georgievna, sang in the church choir. I have been singing in the church choir since the age of eight, following in the footsteps of my Grandmother Dora.

At first, our church was located in a small “home” type of environment. With their modest efforts, the parishioners raised funds and bought a former Lutheran church, which was turned into the current church. Despite the fact, that the parishioners did not earn much money, they nevertheless accomplished this purchase, and began to fix the church and the site. Father Peter Mocharsky and his entire family were devoted, kind people, and Father Peter was especially distinguished by his modesty and love for his flock.

How could these immigrants, these ordinary people, create not only this church, but also a network of churches throughout America, Europe, South America, and even Australia? What motivated and pushed them? They wanted, by all means possible, to preserve Orthodoxy and their Russian culture. They truly loved the motherland that they were forced to leave. These were deeply religious people who were ready to sacrifice their tireless strength, their time, their talents, and their resources for the benefit of their church, community, and their children!

Each family did its part – both spiritually and materially. There was no such thing that someone stood on the sidelines and watched how others built and did everything.

For example, my father, Arthur, not only served for many years as the elder (starosta) at the Holy Trinity R. O. Church, he was also a member of the church fraternity, headed the audit committee, helped design the hall at the Church of Our Lady of Kazan in Nyack, served as director of the Russian Parish School in Flushing under Father Aleksei Okhotin, took part in the creation of the “Otrada Society,” supported the Congress of Russian Americans, and encouraged the participation of his daughters in all Russian-speaking endeavors: The Theater of Russian-American Youth – under the direction of Tamara Alekseevna Levitskaya; ORYUR – Organization of Russian Young Scouts; the Russian Choral Society – under the direction of Vladimir Pavlovich Rudenko, and in many other endeavors.

My parents gave their time to the upbringing of my sister and me in the Orthodox, Russian spirit, and served for us as a bright, selfless example in everything.

When communism fell in 1991, my parents, along with a group of “white immigrants”, traveled to Russia to visit churches and other places of interest. It was a difficult trip for them as in a sense, they had to relive the difficulties they encountered during that phase of their lives. Nevertheless, when a new wave of Russian immigrants began to flow into our church in the 1990s, many of whom did not know the Orthodox and church rites, Arthur, then being already the elder (starosta) under Father Vsevolod Dutikov, welcomed these people and began to teach them, and explain to them when it was acceptable to light candles, how to behave in the church, etc. Arthur believed that these people were not to blame that they grew up under communism, and that we need to accept them, and help them understand the meaning of Orthodoxy and adapt to a new life in America.

The golden rule for Arthur was respect – respect for the family, the community, and everyone he met on his path in life. He always told my sister and me – respect everyone, whoever they are! Arthur always found a common language with everyone, knew how to converse or joke with all (in four languages!), and always smiled at everyone with his brilliant, sincere smile! Arthur deeply loved his wife and family, and always put himself in last place.  My father would say: “The letter ‘I’ (pronounced ‘ya’) in the Russian alphabet is the last letter!” Together with our mother, our parents helped their community, the elderly, and strangers. Thanks to their vast circle of friends, we got to know Russian artists, poets, singers and scholars. Often opera singers and musicians performed at parties at our home, and poetry was recited. Russian songs were sung and funny anecdotes were told.

Thanks to the efforts of our parents, my sister and I grew up as Orthodox, Russian girls in America; we received a good education, set out on our career paths, and in turn got married and raised our own children. We continue to participate and help in our churches, and in many other community-oriented organizations.

Our parents Artur Yakovlevich and Rita Petrovna, and our grandparents, taught us to respect everyone, love Russian culture, not be afraid of work, and help our neighbors. They were not the only ones – the second wave of immigrants consisted of just such people – and thanks to all of them, the Russian Orthodox Church Outside of Russia flourished and grew stronger!